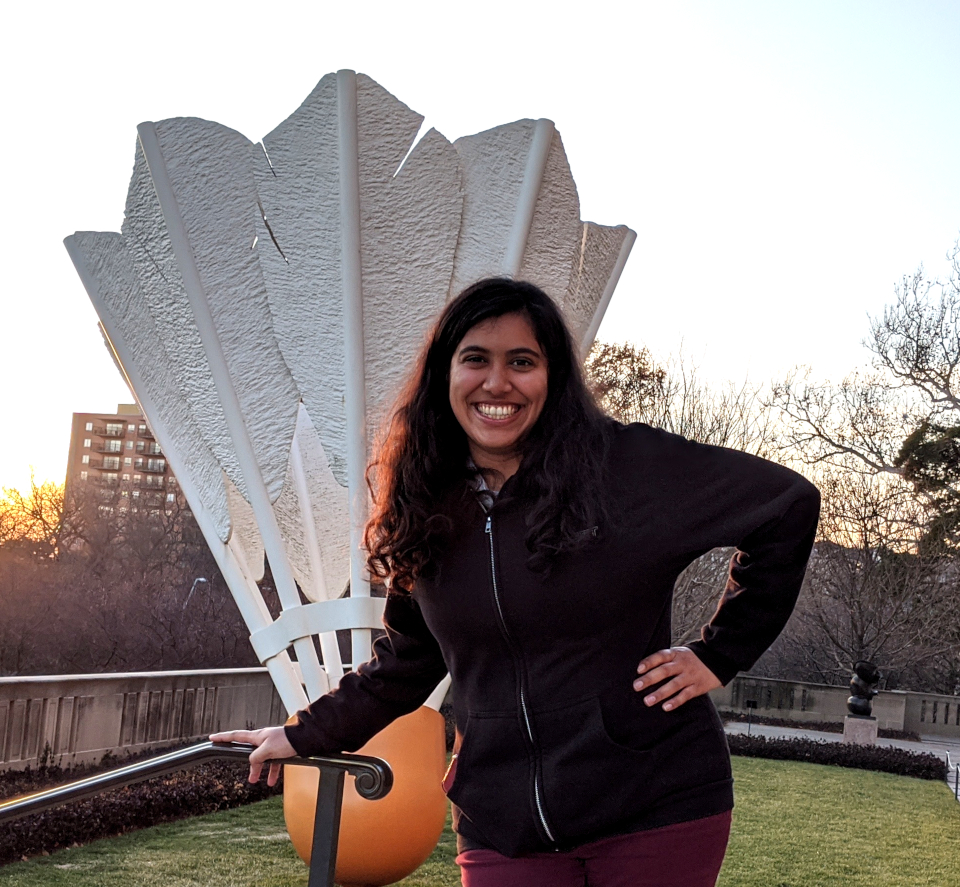 I am a fifth year gradaute student at Texas A&M University being advised by Dr. Lucas Macri. I focus on incorporating Mira and Cepheid variables into the extragalactic distance scale. You can learn more about my research here.

Alongside my PhD, I am earning a Graduate Certificate in Public Management from the Bush School of Government & Public Service. I am also involved in multiple science outreach projects (and other efforts) that you can read about here.

Outside of work, I'm an avid knitter and crocheter. I'm trying to branch out into cross-stitch, but my yarn stash needs to be cut down first!

My work is concerned with how Mira and Cepheid variables can help us calibrate the extragalactic distance scale and determine the value of the Hubble constant, which in turn will tell us how the Universe is expanding. 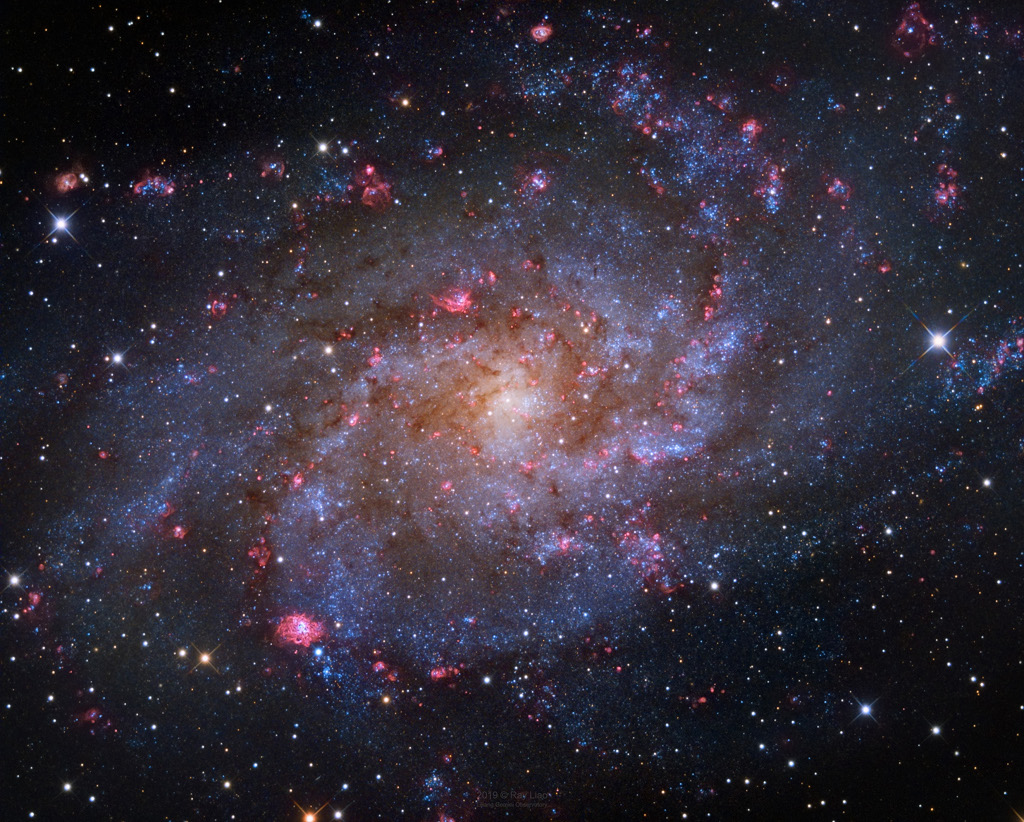 M33 Miras in the Optical and the Near-Infrared

Mira variables (Miras) are Asymptotic Giant Branch stars that vary regularly in brightness on the order of 100 to 3,000 days. Their variability is more stochastic than that of Cepheid and RR Lyrae variables, but it is also much larger. Miras have low-mass progenitors, making them likely to occur across all types of galaxies.

Miras have been found to have low-scatter period-luminosity relations in the near-infrared, giving them potential as extragalactic distance indicators. Rubin Observatory's Legacy Survey of Space and Time will image thousands of galaxies in the optical, producing abundant time-series data whose cadence is well-suited to finding Miras. To this end, we are attempting to characterize Mira behavior in the LSST bands using optical and near-infrared observations of the galaxy M33. All the data were taken by the Canada-France-Hawaiʻi Telescope, which sits near the summit of Mauna Kea. We use a known sample of M33 Mira candidates with machine-learning classifiers to identify new Mira candidates in M33. 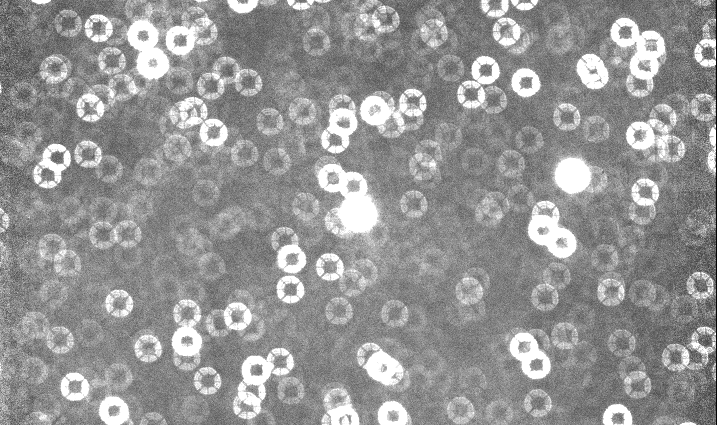 Cepheid variables are integral to the extragalactic distance scale and form the backbone of our highest precision measurements of the Hubble constant. Parallax measurements from the Gaia mission can enable us to better calibrate the Cepheid period-luminosity relation, which is key to measuring distances with Cepheids. However,Gaia data products require parallax offsets that depend on magnitude and ecliptic latitude.

Hubble Space Telescope (HST) observations of Milky Way Cepheids can play a critical role in local measurements of the Hubble constant, as they can be simultaneously used to determine the Gaia parallax offset for Cepheids and reduce the zeropoint errors that arise while comparing MW Cepheids to extragalactic variables. Such observations were obtained during HST Cycle 27, but the Cepheids were observed at random phases and required phase corrections based on data in the VI bands to determine their mean magnitude.

To check the consistency of the phase corrections, we used data taken by the United Kingdom InfraRed Telescope's Wide-Field Infrared Camera to obtain H-band light curves of seven Milky Way Cepheids. To avoid saturation from the target Cepheids, the Camera is defocused prior to the Cepheid observations. The resulting images (one example shown above) show significant crowding and blending, so instead of using traditional photometry techniques, we turn to difference imaging analysis. Read the paper here. 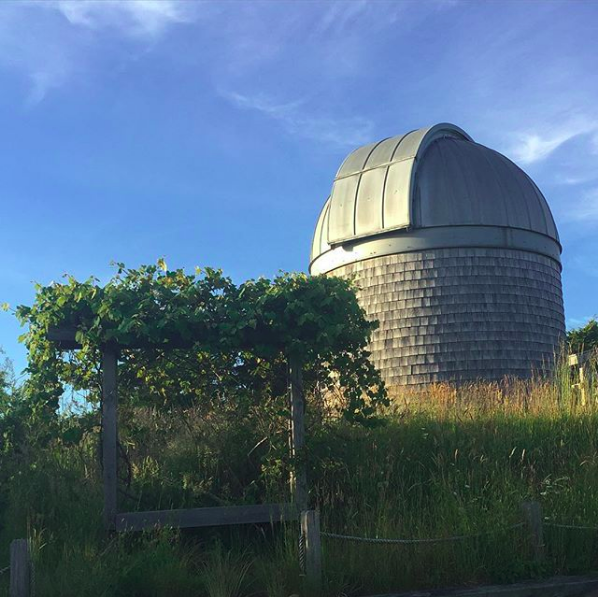 My REU project at the Maria Mitchell Observatory was identifying sub Damped Lyman-Alpha Absorbers (subDLAs) in quasar absorption spectra. I searched through 72 spectra taken by the Keck Echellete Spectrograph and Imager and identified 17 subDLAs. Metallicity and redshift measurements of these objects suggested that DLAs have similar metallicities over the redshift range sampled. My advisor for this project was observatory director Dr. Regina Jorgenson. I presented my results at the 229th meeting of the American Astronomical Society. 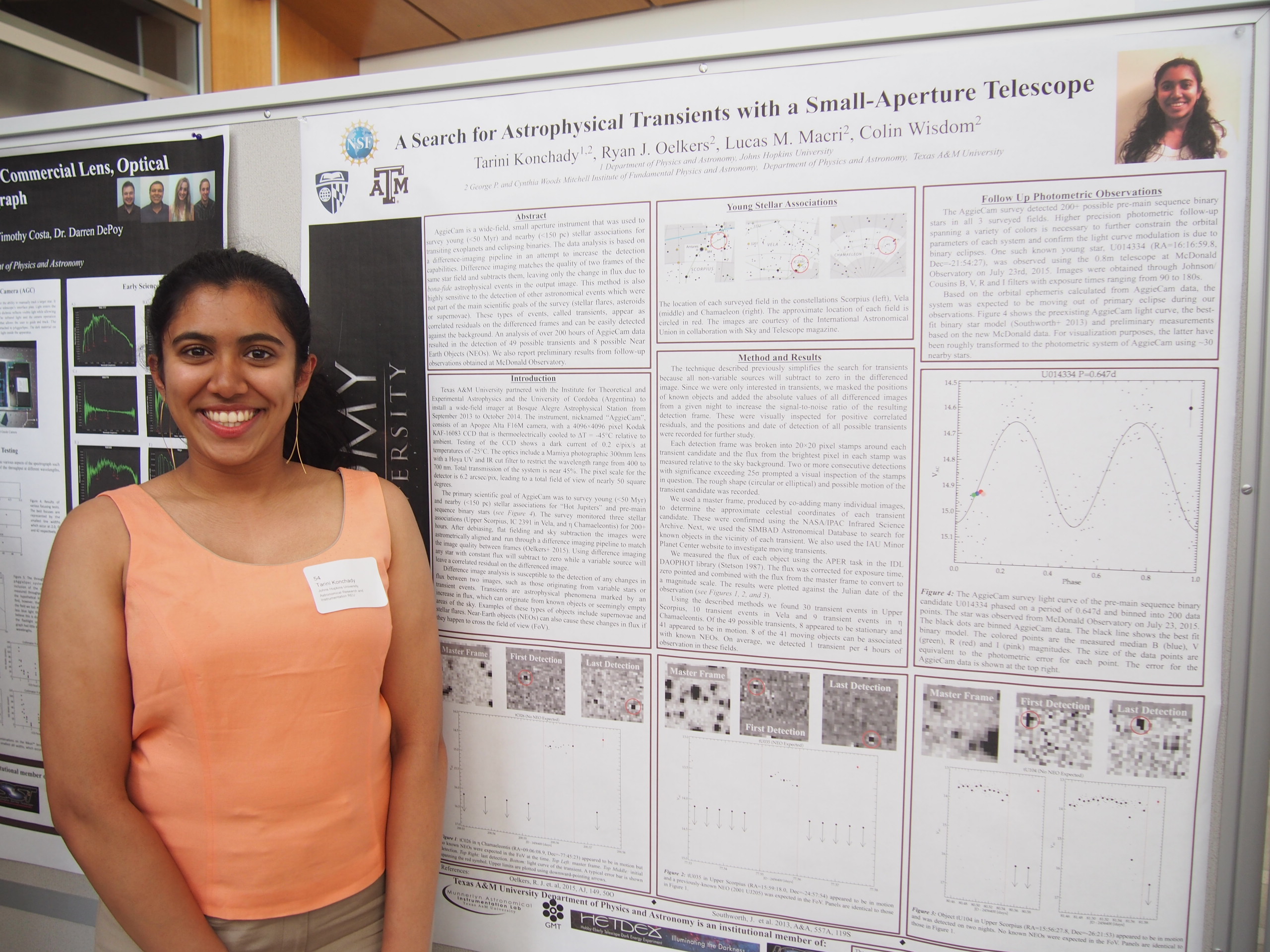 My REU project at Texas A&M University (TAMU) was searching for astrophysical transients in data taken by the small aperture, wide-field instrument AggieCam. I identified 48 possible transients in over 200 hours of data, 8 of which may be associated with Near-Earth Objects. My advisors for this project were Dr. Ryan Oelkers and Dr. Lucas Macri, who became my graduate advisor. I presented my results at a campus-wide summer undergraduate research poster session that was held at TAMU. 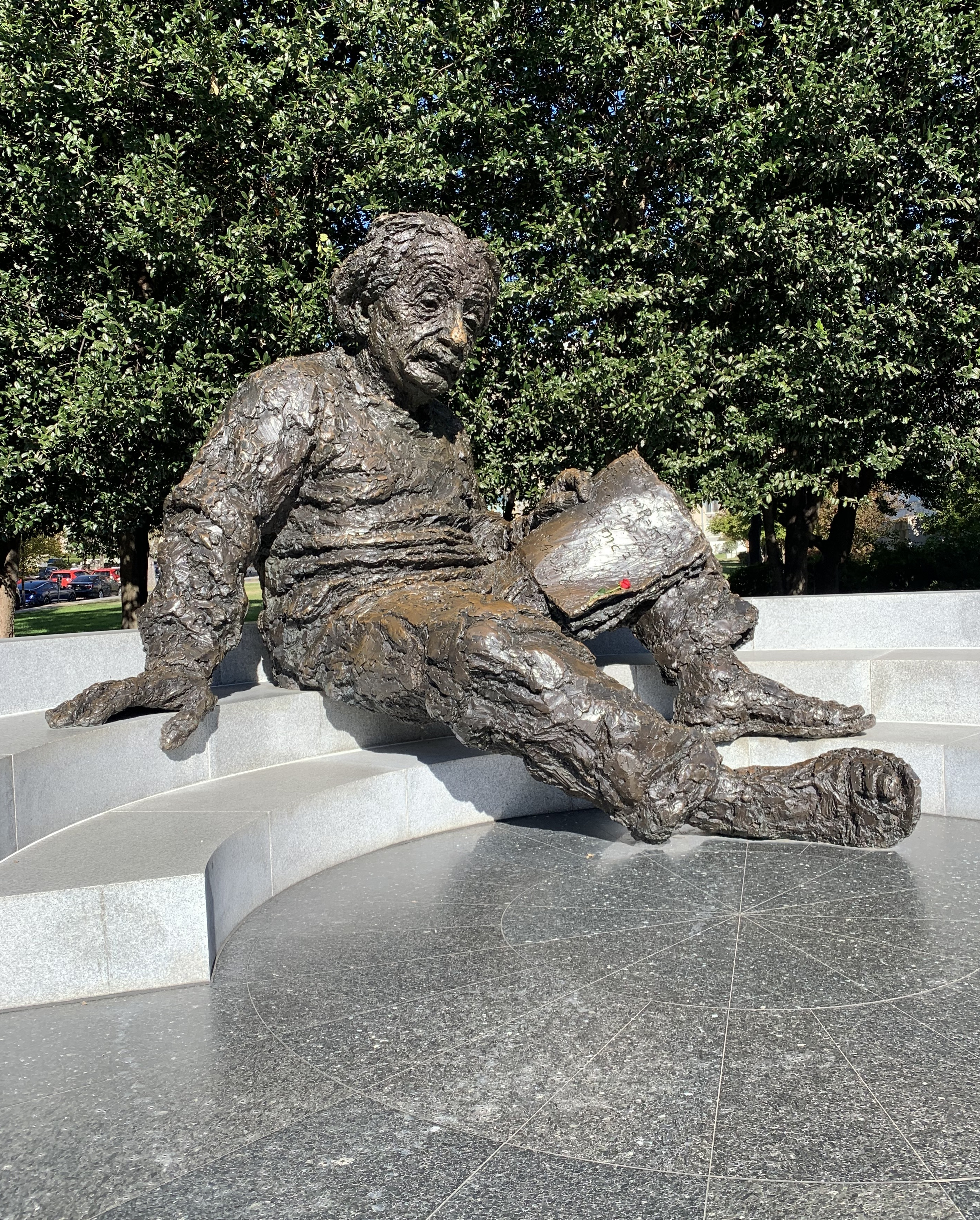 During Fall 2021, I was a Lloyd V. Berkner Space Policy Intern on the Space Studies Board at the National Academies of Science Engineering and Medicine. I helped prepare materials for three decadal surveys: Astronomy and Astrophysics 2020, Planetary Science and Astrobiology 2023, and Biological and Physical Sciences Research in Space 2023. I also assisted with preparations and internal communications for the Fall 2021 meeting of the Committee on Solar and Space Physics. 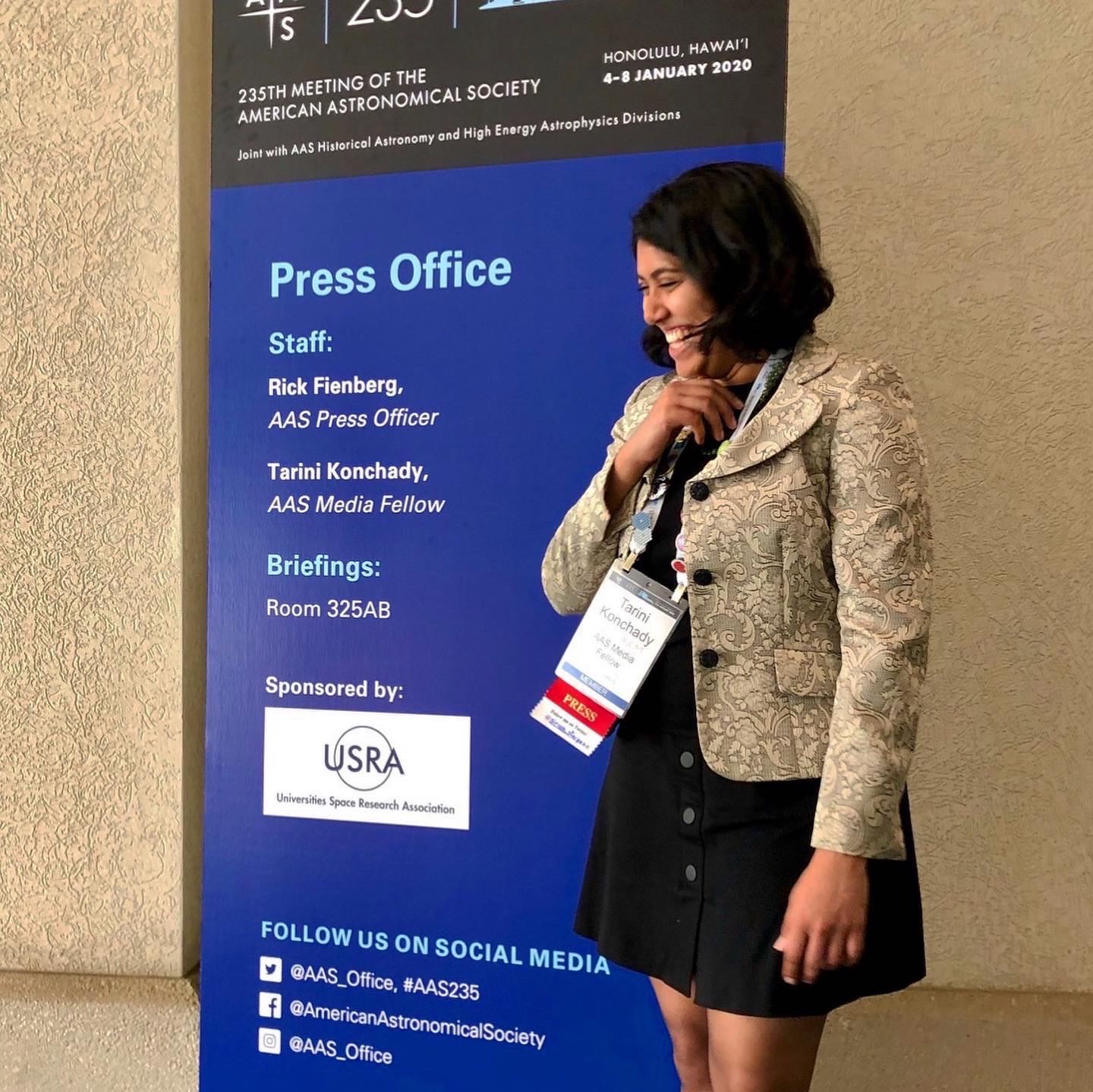 I served as the AAS Media Fellow from Fall 2019 through Summer 2021. My duties included assisting with press release distribution and writing posts for AAS Nova every two weeks. At the winter and summer AAS meetings, I was one of the hosts at press briefings and also assisted with meeting coverage through Astrobites. 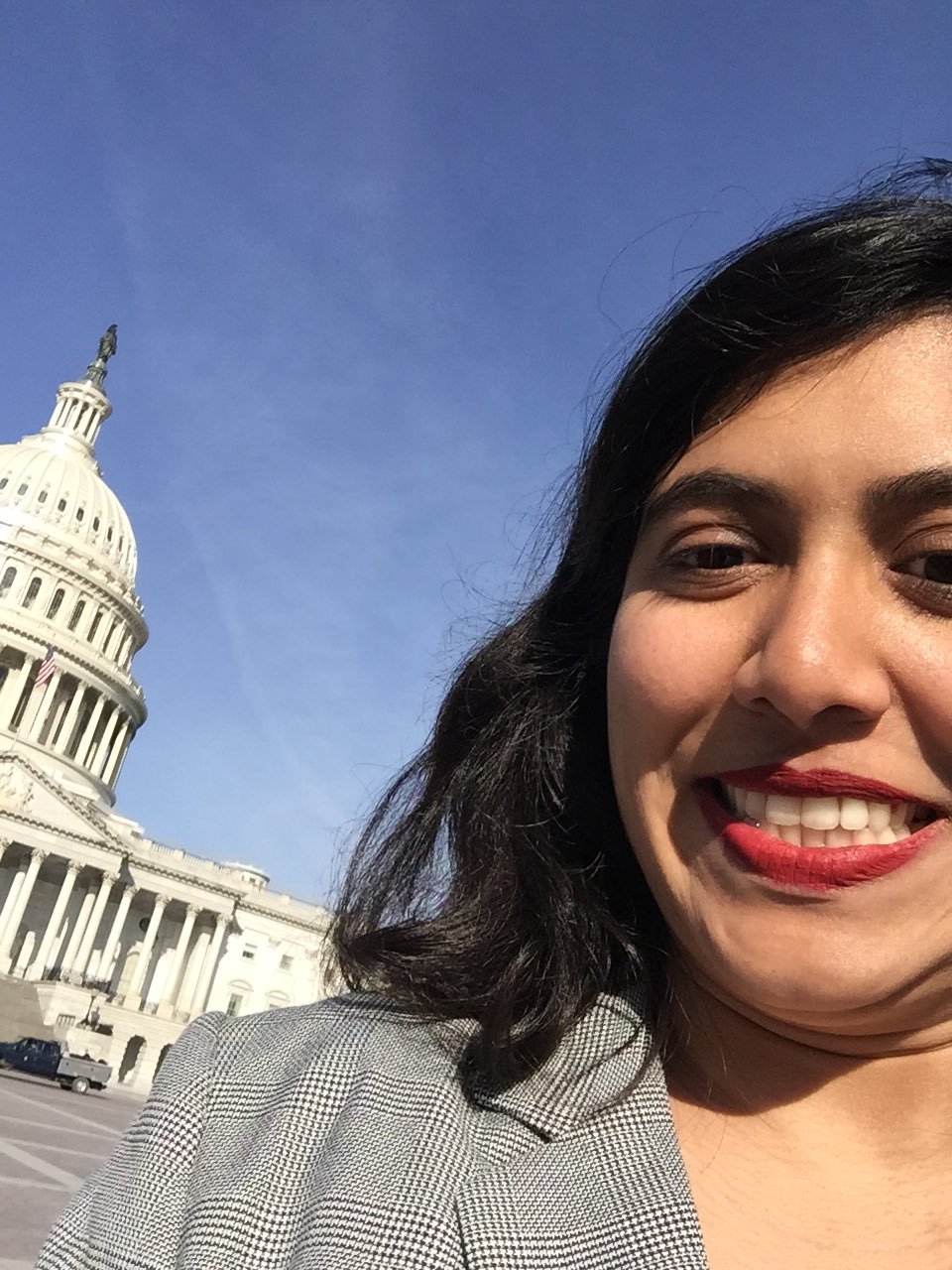 I was selected to attend the 2019 AAS Congressional Vists Day (CVD) along with fourteen other astronomers from across the US. We participated in advocacy training at the AAS Office and the National Academies prior to the visit. We were split into groups of three by region; my group (advised by Joel Parriott) visited the offices of congressional representives from Texas, Alabama, and Kentucky to discuss the Astro2020 Decadal Survey and continued federal funding for astronomy.

I joined the Astrobites collaboration in 2018. I was a writer in the daily rotation from January 2018 to December 2020, and currently serve on the editorial and policy committees. I'm one of the authors on our submission to the Astro 2020 Decadal Survey (Khullar et al. 2019).

2020 Conferences for Undergraduate Women in Physics

I was part of the local organizing committee for the Texas A&M site of the Conferences for Undergraduate Women in Physics (CUWiP), which was held during January 17-19 2020. I co-wrote our successful site proposal, made logistical arrangements for the conference, coordinated our application process and attendee schedules, and moderated panels during the conference. 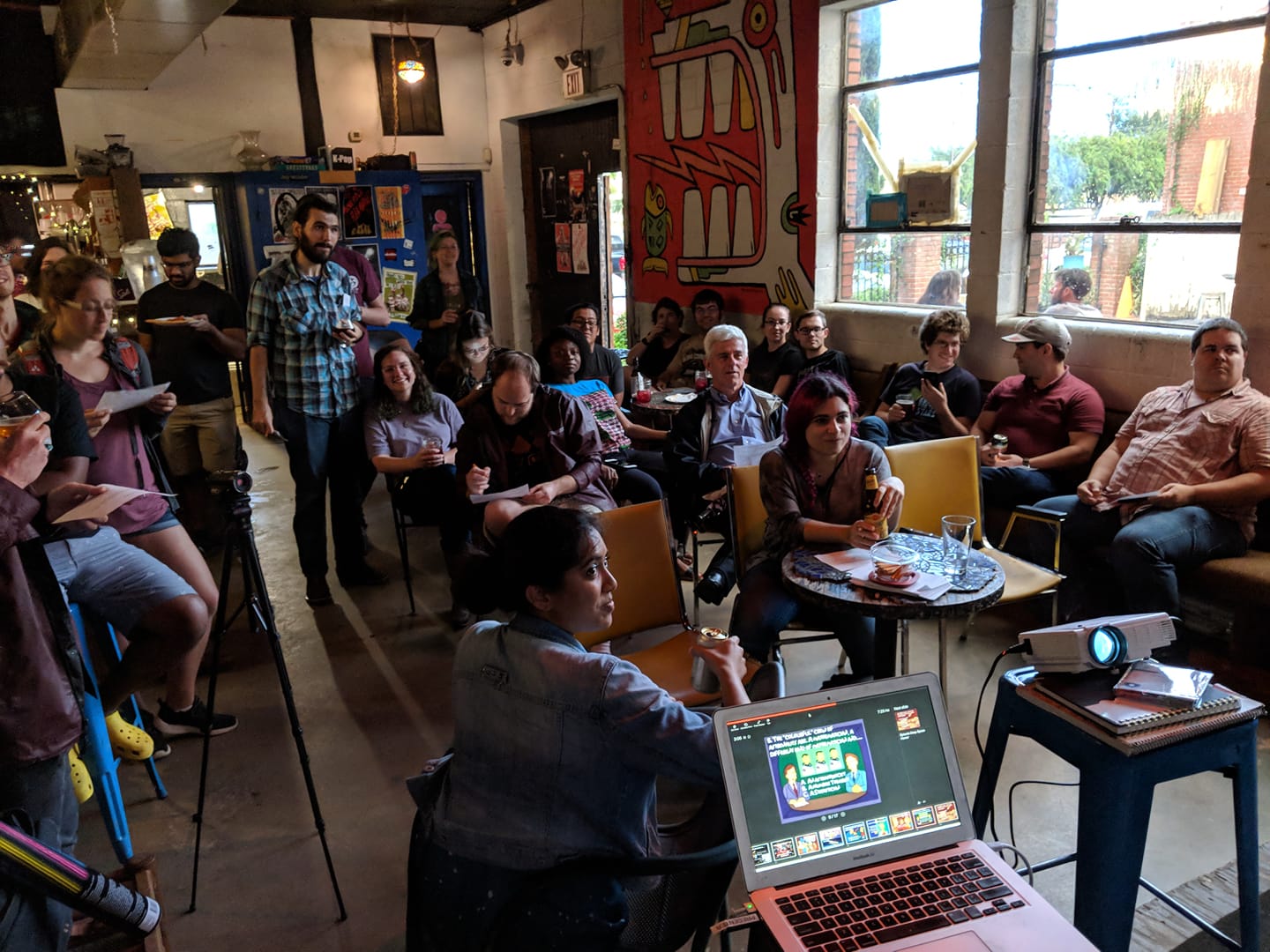 I am a founding member of the Astronomy on Tap chapter in Bryan-College Station. I frequently emcee for this monthly event (as the very chirpy MC M33) and am in the regular speaker rotation. I have also been our trivia writer and Twitter handler.

Society for the Underrepresented in Physics and Astronomy

I am a co-leader of the Society for the Underrepresented in Physics and Astronomy (SUPA). SUPA's aim to is provide a community for underrepresented groups in our department and a space to discuss the challengs faced by these groups. Our meetings are open to everyone in the department. I frequently prepare meeting materials along with my fellow leadership members and handle meeting logistics.

I am involved with the Graduate Student Assembly in the Department of Physics & Astronomy at Texas A&M. Our organization aims to advocate for ourselves within the department and build a strong and supportive graduate community.

The Letters to a Pre-Scientist (LPS) program pairs scientists with students to be pen-pals for an entire academic year. I've been a scientist penpal in this program since 2018, and I'd recommend it to any scientist (the LPS definition of a scientist is very broad and inclusive)!

The Skype a Scientist connects educators with scientists to have live chats with classrooms. I've been a scientist in this program since 2018, and I've chatted with elementary school students and library reading groups.

The Texas A&M Physics & Engineering Festival is an annual event that has been attended by thousands prior to 2020. When the Festival was held in person, I managed astronomy demonstrations on lunar craters and constellations.